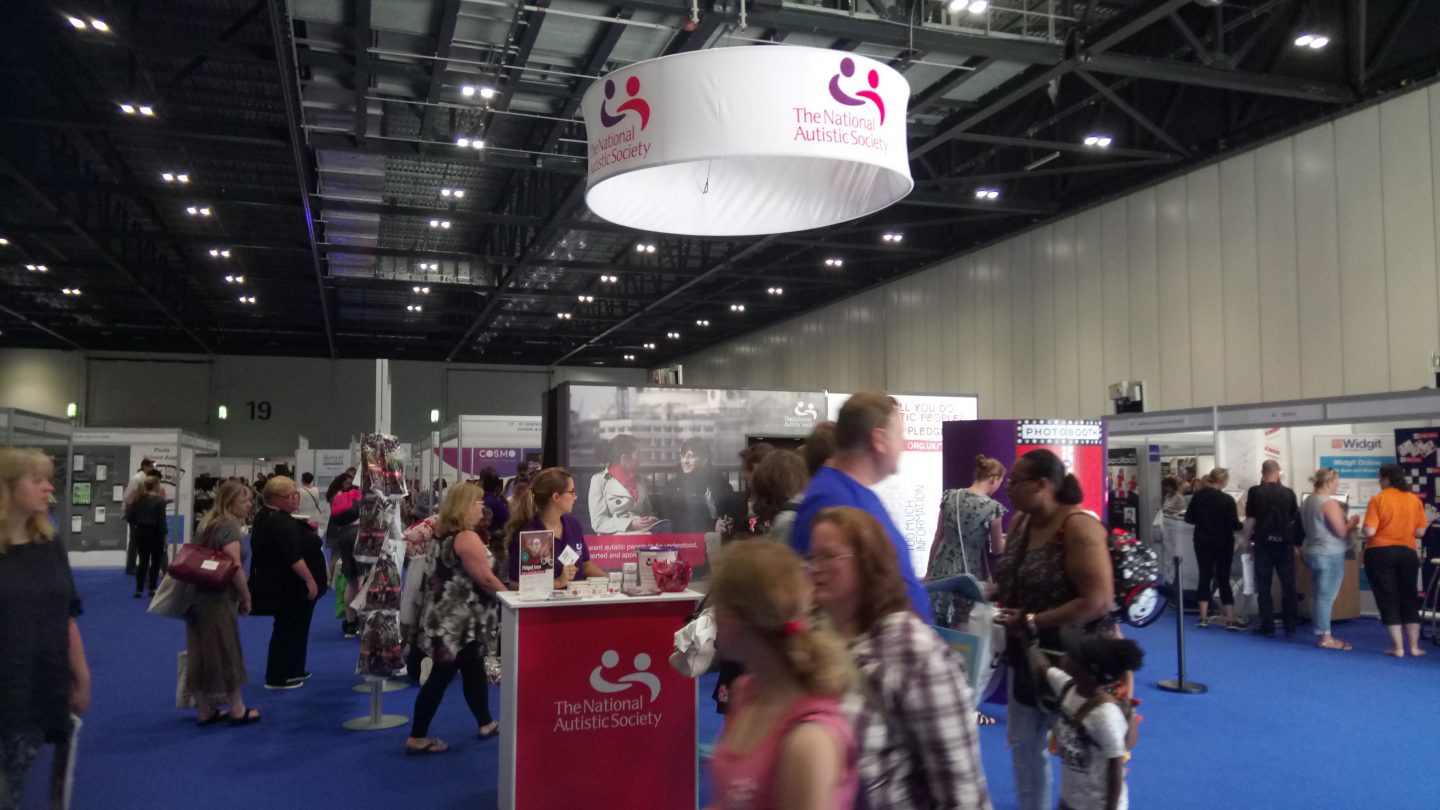 My first Autism Show! Not long after my son was diagnosed with autism last year I saw adverts for the 2016 Autism Show.  I have been to several shows like this before for work and for pleasure (e.g. the Good Food Show) but I decided that the Autism Show must be more geared to professionals. Looking back I think I was still processing the diagnosis and what autism was and so wasn’t ready to attend the show then.

This year I am ready and excited to learn, looking through the programme of speakers I wanted to see someone on every day! This wasn’t very practical so I decided the person I was most interested in hearing speak was Gina Davis so I picked Saturday 17th June in London.  On my way up I was enjoying the peaceful train journey with no kids and looking forward to exploring different resources, therapies and ideas about autism. Thankfully I used some of the time to plan out which speakers I really wanted to see so the rest of my day revolved around making sure I was in the right place at the right time for these speeches.

The first speaker I listened to was Dr Ben Robins from the University of Hertfordshire who talked about Kaspar the social robot: Encouraging social interaction skills in children with autism. I had seen Kaspar briefly on the news so was interested to hear a bit more about him.  What an amazing robot, I would love my son to meet him, I think he is just at the perfect stage to be learning about social interaction and I know this predictable and non-human option would get a much better response than me and my pictures of different emotions.  My son avoids looking at my face and I can see so much benefit to starting the process with Kaspar, unfortunately, Kaspar does not live nearby at the moment so we are unlikely to get the opportunity.  I think Kaspar is fantastic and the fact that he sings if you’re happy and you know it is great, just don’t tell me he sings head, shoulders, knees and toes or I will be dragging my 3 year old cross country once a week to meet him! 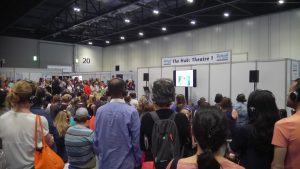 Next was Emily Webb from Tobii Dynavox looking at Developing early language and communication skills: A Tobii Dynavox perspective. As someone who has done a lot of PECs over the past year and followed the Pyramid Approach to Education I was very interested to hear the different perspective she presented.  She compared the language input for a typically developing child with one who has a communication difficulty. The bit that struck me was that for a child with speech and language problems they need aided language to go in (usually a visual aid) and if this is only happening for say an hour a week then you are not getting anywhere near the same input as a typically developing child let alone the additional input needed for this person.  It really made me think about the importance for me to increase the visual aids and ensure my son is getting that language input all day.  The other thing I took from her speech was the need for me to expand on his language beyond just making requests and to move on to more conversation with him even as simply as giving the ability to say he likes or dislikes something. 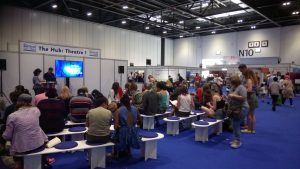 I am really pleased I stayed in my seat for the next speaker Steven Michaelis from Sensory Activation Solutions (SAS) who spoke about Improving sensory processing – A practical way forward.  A fascinating talk about how we process information in our environment, and how we filter that information or those on the spectrum who struggle to filter out and end up trying to focus on too much information.  Then it got more interesting for me, he talked about the organised left side of the brain and the less organised / more creative right side of the brain and the importance of building connections between the two sides.  My son’s speech has regressed several times now and I have really been struggling for a reason why, the fact that he may be trying to use the wrong side of his brain to process language makes sense to me.  I have even said to people I think he has a connection issue in the brain as it’s clearly there sometimes and other times it’s not.  It was pointed out that some very simple exercises like touching your right knee with your left hand is making a connection between the two sides of your brain.  Sensory Activation Solutions (SAS) have developed a programme of therapy which can be used passively, it involves using headphones to play music to the right side of the brain and language to the left in order to teach the habit of using the correct side of the brain to process language or music.  I am going to look into this one a bit more and may well give it a go.

A bit later I joined the short talk about Lego Therapy by SEN TREE.  I have recently been working on building things out of Duplo with my son in structured sessions with some success, Lego Therapy is something I want to learn a bit more about.   The approach developed by Jacqui Rochester and Dawn Ralph is adapted for children with speech and language difficulties.  I would really like to start working on some of the basic skills behind the therapy with my son and hopefully when he is ready we will find a Lego Therapy group.  So I have bought their book Building Language using Lego Bricks. A Practical Guide.

I caught the end of Dr Helga Abernethy and Naomi Yelland talking about When is behaviour not behaviour: How sensory difficulties and anxiety can impact on behaviour and how to help. This was a good reminder for me to actively decide if behaviour needs to be changed or just managed.  They also shared some useful tips on things to try out.

Next was the main attraction for me – Gina Davis speaking about Inspiring attention and communication in young autistic children, she is a fantastic speaker- so very easy to listen to.  My son has been doing Attention Autism (stages 1 & 2) both at nursery, with speech and language and a playgroup for a while now, alongside this I have been doing it at home when I have a group of kids willing to participate.  It has been a big part of his development over the past year. The opportunity to hear Gina Davis talking about the programme was very helpful to me in understanding the basis of the objectives.  The reality is that it will do my son more benefit to follow the full programme with his peers at pre-school and his existing playgroup (although we will still use the bucket at home).  I found it a very useful reminder to ensure activities are visually engaging and I learnt about stage 3 & 4 and the value of these skills for learning later on.  She also reminded me to celebrate with my son on the successes as they happen. 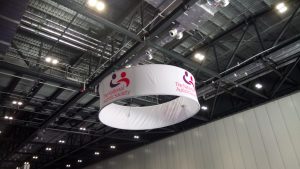 Towards the end of the day I decided to fit in the last two speakers, mostly because I had the time and wanted to make the most of the opportunity to hear from more people.  I sat down to a lady speaking (I think it was Melissa Chapple but I may be mistaken), she was already halfway through her talk and at first I struggled to follow what she was talking about.  For a moment I almost gave up on following her but one thing I have learnt in the past year is the importance of patience.  She began by explaining evolution and how she believed people on the spectrum may be a glimpse of human evolution, she discussed the emotional skin and how people with autism may feel your emotions or stress when close to you.  She described the impact of food, the difference between her food that had been grown lovingly and ‘plastic food’, she talked about seeing traces of movement from other people.  She then reminded me she was simply trying to open a window and give us an idea of how some people on the spectrum think or feel.  I am so glad that I sat down to this speaker and followed her to the end and actually listened to what she had to say, I was close to dismissing her simply because her thoughts were different to mine but in listening to her I probably learnt the most valuable lesson of the day.

The final speaker was Georgious Papadakis from Cosmo, it was very interesting, a creative therapy designed for SEN and visual learners and I may well look into this further (if I can find any time).  I got round all the stands in between the speakers and now have tons of leaflets to go through and follow up on.  I have a few new gadgets to try out and I met some lovely people.  I am really glad that I came alone (although I know my son would have loved the sensory room) as I feel I got so much out of hearing the different speakers over the day.

I learnt so much so thank you to the Autism Show and all the stand holders and speakers, I will be back again next year!