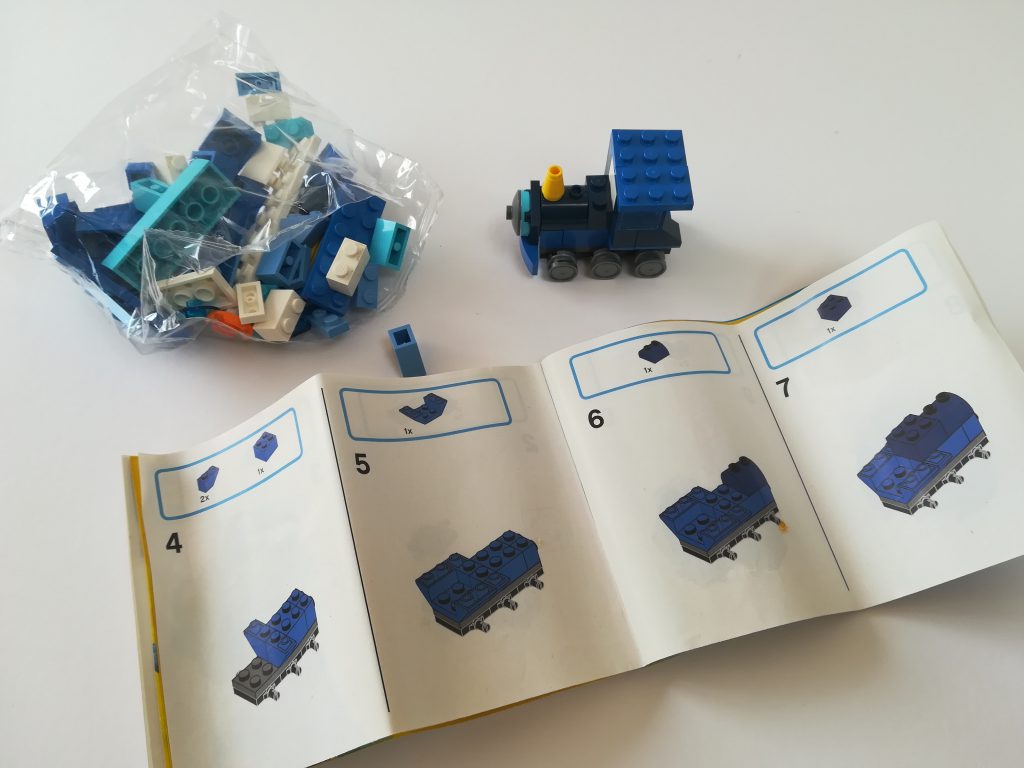 My son has moved on from DUPLO® and developed a keen interest in LEGO which is fast becoming a special interest!

Therapy always works better when it is motivating so I have been on a LEGO® Therapy course and want to share a little about it with you and how to run a LEGO club at school. I will also look at some adaptions for those like my son who are not quite ready for the group work.

What is LEGO® Therapy?

LEGO Therapy is a structured play approach to develop social skills for children on the autistic spectrum.  A group of children work together to build a LEGO structure, each have defined roles and follow a set of rules to support this play therapy. Skills developed include sharing, turn-taking, following rules, using names and problem-solving.

LEGO based therapy was developed by Daniel LeGoff, a US based Psychologist who developed the therapy after observing the positive interactions around LEGO in his waiting room. Rather fitting that Mr LeGoff developed LEGO therapy given that LEGO is in his surname!

There are other LEGO based therapies such as Build to Express which focuses on team work and expression. But in this post I am look at therapy developed by LeGoff and adaptions of this method.

LeGoff observed children on the autistic spectrum in his waiting room, and over time he noticed positive interactions around the LEGO amongst children who often avoided social interaction normally . It was also noted that the LEGO was the most popular toy in the waiting room.

The main purpose of the therapy is to develop social skills including:

LEGO therapy uses an achievable project for all involved with clearly defined objectives, roles and rules. The children should be engaged and enjoying the activity throughout the play based therapy.

LEGO is a highly structured, visual construction toy. It is also multi sensory, it gives great sensory feedback when snapped together. It is highly motivating for many autistic kids. Children on the autism spectrum are often (not always) very visual and rigid / routine based thinkers.

LEGO therapy is designed with a clear structure with rules and roles so there is clarity over expectations. Providing a structured approach with rules to a social environment helps to teach socially appropriate behaviour in a controlled situation.

LEGO construction and the build instructions are very visual and logical- again areas of strength for many on the autistic spectrum.

Not all children will have an interest in LEGO however it is often possible to build their own interests in- for example cars, horses or dinosaurs can all be built out of LEGO.

How to run LEGO® Therapy Sessions

The first thing you need to do is work out which children will benefit from the therapy and what your goals are for each child. The sessions should then have the same children in the same groups for usually an hour a week over 10 weeks. You can have several groups running at a session but each group should be 3 children and 1 adult.

You will need to do an assessment of the children’s skills and ability first but knowing the children well will make this easy. This is why school based therapy is the best option here as you will be well placed to match the children and assess skill development over time.

When deciding which children to put together it is essential to consider, language skills, cognitive ability, personalities and relationships alongside their individual targets /aims.

Don’t call it LEGO therapy, come up with a name that avoids the use of the word therapy. It is likely you will have to adapt some resources for different children and this is easily done when you know the child’s needs, hence the need for an assessment first.

You may want to develop a social story about LEGO club that is provided when the children are invited to the group. Having a word bank or crib sheet with language for the LEGO pieces and possibly some describing words to support the group is helpful. Having badges set up for the different roles, club rules and build sets will all need to be set up in advance.

You may want to develop the rules with the children in your first session. Keep it to 10 rules with things like:

Think about the children and their needs, will you need a time out or break option?

How long should a LEGO Therapy session be?

Time needs to be based on the age and ability of the specific children. However most will be once a week for an hour. This would consist of 40 minutes of build and 20 minutes of free play at the end. For children under 8 you may want to do shorter sessions of 20-30 minutes.

To develop the skills and assess the value of the therapy ideally groups will run for 10 weeks at a time and be members only.

During the LEGO® Therapy Session

Start each session with a welcome. Talk through names and language that will be used, an introduction to the build task and assign initial roles. Go over the group rules. It is good to put emphasis that it is a group build and no one is in charge.

Each group will have 3 children and one adult. Each child will be assigned one of the roles and the adult will be the Facilitator. The children will rotate their roles over the session. This needs to be clear at the beginning. The facilitator should look at the build and set sensible stages of the build for the roles to rotate.

The LEGO build you select should be simple at first. It will take much longer to do a simple build as each brick requires co-operation from all three children. Have several small builds ready and after the first couple of sessions you will be able to judge how much the group will get though. Agree at the start if the build will be kept or broken down at the end.

Towards the end of the session there should be some time for free play. If you have more than one group it is good to have each group present their builds to the others.

Have a joint tidy up at the end with a goodbye. The facilitators should then record session logs and plan for their next session.

You can decide what each role is called and this can be agreed at your first session with the children as the roles are explained.

Engineer / Architect / Designer / Planner: this is the person who has the instructions and tells supplier what pieces are needed and the builder how to put the pieces together.

Supplier / Sorter / Provider: this person has the pieces (use a tray or box so it can be easily moved). Listens to Engineer and provides pieces as directed to the builder

Builder / Constructor / Maker: this person puts the pieces together as instructed by the engineer

Director / Manager / Supervisor: this is the adult facilitator role and should not rotate. The role of the facilitator is to keep everyone on task and support socially appropriate behaviour.

Have a plan if a build is not finished by the end of the session. Such as taking a photo of model for each child to take away with them so they know where it is up to.

Evidence base for LEGO® therapy

There are several studies that evidence the benefit of LEGO based therapy so if you are fundraising for your LEGO club or need approval you may want to reference and look at the evidence base:

In order to take part in LeGoff’s LEGO therapy a child will need a number of skills:

Whilst all these skills will be developed the child will need basic ability in these skills to take part. My son is brilliant at completing LEGO but he is non-verbal and does not have the expressive language needed to take part. I hope that he will one day be taking part in a LEGO therapy session but for now we are working on these skills and using an adapted version see below.

Although LEGO therapy is designed for social skills it is also great for language development. When you are building something and cannot see the instructions lots of expressive and receptive language is needed. This is where the therapy can help develop language skills. At the same time this means many children with language difficulties cannot participate unless the therapy is adapted.

I would recommend the book Building Language using Lego Bricks by Dawn Ralph and Jacqui Rochester.  I had the privilege of attending a short workshop by the authors at the Autism Show and their helpful advice on using Lego to support language development as well as social is very useful.

In this adapted version you have two roles Engineer (including Supplier) and Builder. You can also use tokens as a reinforcer, but for many LEGO may be rewarding enough.

The book also has very helpful assessments to test the child’s abilities and understanding of relevant concepts such as colour, shape and prepositions.

The reality is you can adapt any of these methods to suit your child. At home we have started with my son as the Builder but included the Engineer role. I am the supplier as we are just working on him requesting the pieces for now. We will work up to exchanging roles.

As my son is non-verbal we are using the Picture Exchange Communication System® /PECS® for him to request which pieces he needs. I have made the PECS cards up myself, the pick a brick section of the LEGO website is helpful for pictures and names. You can also just photograph the pieces and give them names that suit the build e.g. tail /wing.

LEGO therapy courses are often designed for schools and professionals so as a parent make sure you are clear what will be covered in the course. I don’t intend to run a LEGO therapy club but I do want to know what the skills are, how they work so I can build on the right skills with my son at home and help prepare him for LEGO therapy at school as he gets older.

I attended a course run by Iain Chatwin from Chadsgrove Teaching School. The course was on how to implement Lego based therapy and guidance on monitoring. I would really recommended this course particularly for schools planning to implement LEGO therapy.

I often find that there is a discount for parents for these sort of courses as they are aimed at professionals, so make sure to ask.

LEGO® Therapy kit – where to buy it?

LEGO Classic kits and 3 in 1 sets will give you the best value for money as they have more than one model in the set.

Did you know you can subscribe to LEGO rental clubs? Let me know if you use a good one.

Facebook Market Place, Gumtree and local buy and sell groups are great places to pick up second hand sets. If you are a school ask parents you will often find people have sets they are happy to donate.

You can get instructions for any set from the LEGO website.

Do you do LEGO therapy – any tips? Let us know in the comments.