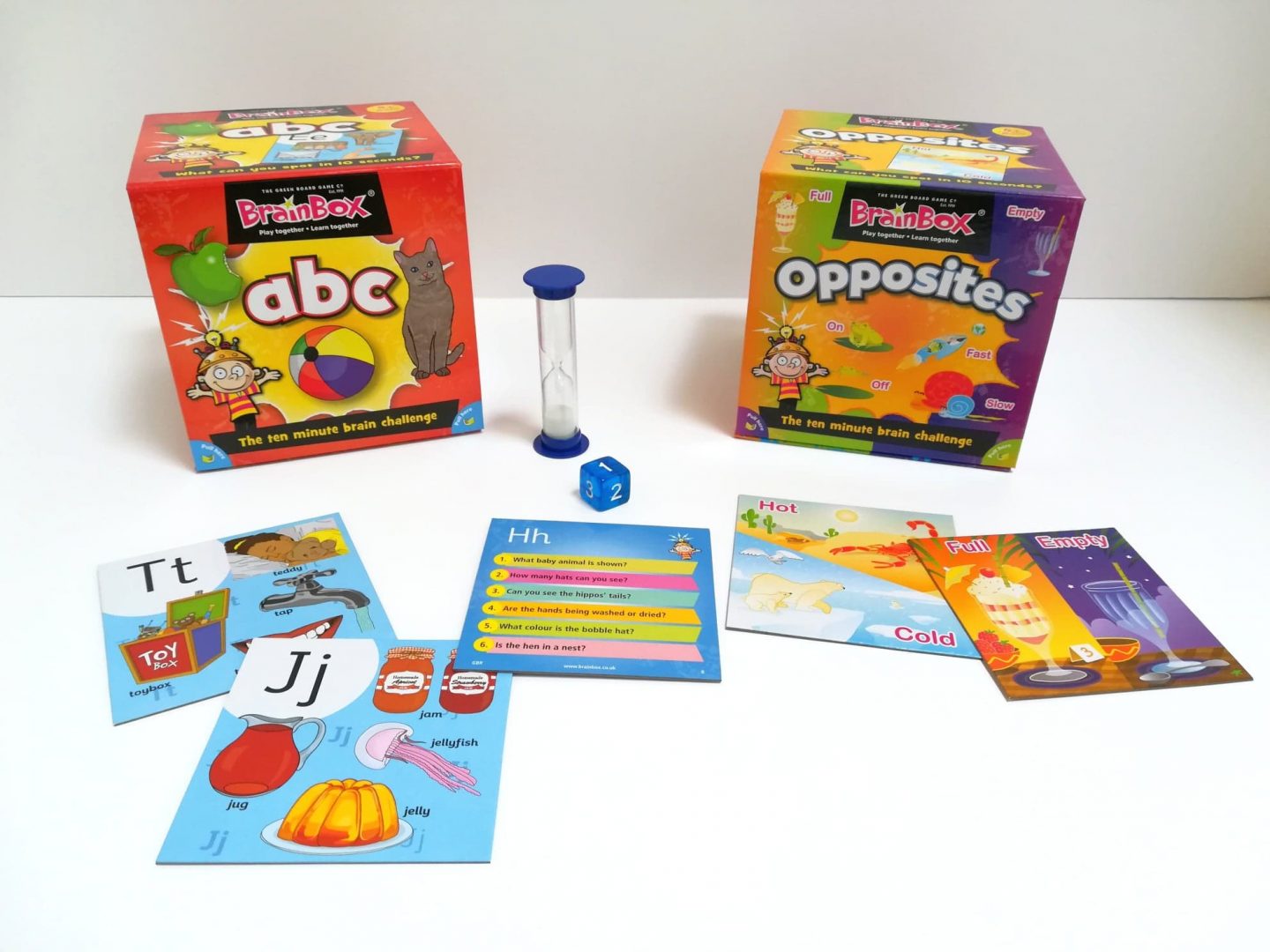 BrainBox from Green Board Games is a multi level game designed for parents to play together with their children. I am always on the lookout for educational games that are fun and very visual so I was very happy to review BrainBox.

I have been kindly gifted the abc and opposites BrainBox games in exchange for this review. All words and opinions are my own.

What is in the box?

I like the way this game is packaged. It is in a nice box with a magnet to close it, it looks good and is practical too. Each box is full of cards with instructions for a one or two player game. The box also contains a dice and timer.

The cards are nice and thick so should stand up to being well used. They are also bright and very visually engaging. There is a good selection of cards in each box (over 50).

How to Play BrainBox

For the one player game you select a card, look at it for 10 seconds using your timer. Then you turn the card over and answer the questions on the back. If correct you keep the card and see how many you have after 5 or 10 minutes.

For the two player game, the first player selects a card and studies it for 10 seconds again using the timer. Then the card gets passed to the other player. The first player roles the dice and the second player asks the question numbered on the dice. Again if correct you keep the card but in the two player you can take turns and see who has the most at the end.

The lovely thing about BrainBox is it can easily be played differently to suit the players. My children are both autistic and my 6 year old is non-verbal so we played a little diffrently. The fact that the cards are visually very clear was great for us. We played by looking at the cards and I verbally asked him to point out diffrent things on the card i.e. ‘where is the cat’, ‘something yellow’. I was surprised at how much he enjoyed this and he was trying to verbalise some sounds so it has been a great communication tool.

My just turned 4 year old does speak but has other communication difficulties. So with him I did the pointing and he would say the words, or shout them in typical 4 year old fashion.

My friend had a play with her bright 6 year old daughter. Her daughter said:

‘It was good, the pictures were clear and colourful‘

‘From a parent point of view, it was brilliant and made you think of what they say (views of the child) and what their perception is. Really good for developing visual skills.’

The first thing my eldest did with the abc Brainbox game was to get all the cards out and line up the alphabet. He really enjoyed doing this and they make really nice flashcards as well as the game itself.

My youngest is a huge alphablocks fan so we were able to use the abc BrainBox to to support phonics with him. The abc cards include digraphs (2 letters together to make a sound i.e. tr & ee). So it was great to have a visual to use with this.

The cards also include the word next to the images so great for supporting spelling too. I think the abc Brainbox is great for young learners, they will already be familar with the alphabet (or still learning it).

I wasn’t sure what to expect from the Opposites Brainbox but was impressed with the selection of opposites used. I was able to pull out some of the easier ones like ‘happy /sad’ and ‘day / night’ to look at with my kids. The cards are great for supporting learning about opposites along with different concepts. It can be really hard to find good visuals of conceptual words like wild, kind and difficult but they have been done really well with BrainBox.

There is a great mix of the more straightforward opposites like tall / short and clean / dirty and the more complex such as apart /together and wild /tame. This makes the card great for discussing these concepts with your children and getting to know which ones they understand / need help with.

I like the fact that the questions on the Opposite BrainBox cards were again based soley on what you see on the front rather than the words.

BrainBox games have been designed with a focus on three main factors: inclusivity, education and fun. The cards have multiple uses and for me the visuals are great so at £10-12 a box I think they are very reasonable. I know ours will be well used.

There is a huge range of different BrainBox games and I think they make great gifts or stocking fillers.